For those of you that have followed us long enough, you’ll remember we tried to convert Rx8 engine parts and mix them with Rx7 parts to make a PnP Renesis/REW hybrid with all the advantages of the Rx8, but with peripheral exhaust ports.

Well, it was kind of successful, although producing this as a product and having repeatable performance would be problematic and expensive, so in the end we have decided to ditch the project.

Although the good news for those who do want to REW swap your Rx8 is that we are picking this project back up with a new view to making a repeatable, reliable unit.

In response to one of the q’s below; In my mind there are 3 main routes to this REW/RENESIS hybrid depending on what your use is and what you want from it.

The first option and the probably the least cost (maybe) is the full PP, so that’s a peripheral intake and peripheral exhaust where the side ports are not used at all. Each intake port will require a separate throttle body (DBW).

Making this work on the OEM ECU will be difficult, I’m not saying impossible but yeah pretty hard and you’ll get better results with an aftermarket ECU such as an Adaptronic.

Power; I’d expect to be delivery of which in upper rpm ranges, so less torque than a Renesis down low, but peak power expected to be c280-300WHP. Due to the way this is delivered this would suit a full on track car or, a weekend fun car, definitely not a daily!

The other route is Forced induction (turbo) with the current intake offerings, they’ll perform very much like an Rx7, Due to the size of the turbo required it’ll probably be in a top mount configuration.

This setup will need an aftermarket ECU to run correctly.

The hybrid project can use the same intake we have developed for the Renesis Semi PP engine, this is superior to the option above as it keeps the OEM throttle body and has controllable valves to manage the intake charge. This can be can configured NA or FI, and or moved from NA to FI at any time spreading the cost.

Both NA and FI (lowish boost) can be all done on the OEM ECU, if you want to push more towards the 450WHP mark then a swap to the Adaptronic will be required.

Power; NA – To be honest I don’t really know, it’ll certainly deliver it in a broader band than the full PP but won’t match the peak delivery.

FI Power; anything from 300-450WHP for Rx8 rotors, and 450WHP upwards for Rx7 rotors. I suspect this configuration will spool better due to the intake control and feel better off boost too.

So what will it consist of

Sump will be our billet Rx8 sump with a couple of extra lugs for engine mount bracket support. – The advantage here compared to the traditional method is the sump is held much higher, the Rx7 sumps on the Rx8 hang very low!

The first step is to make the adapter plate for the REW irons so that the Rx8 cover may fit without interruption, we have already mocked this up and it works!! A few refinements to the image below and this will be off for prototyping. 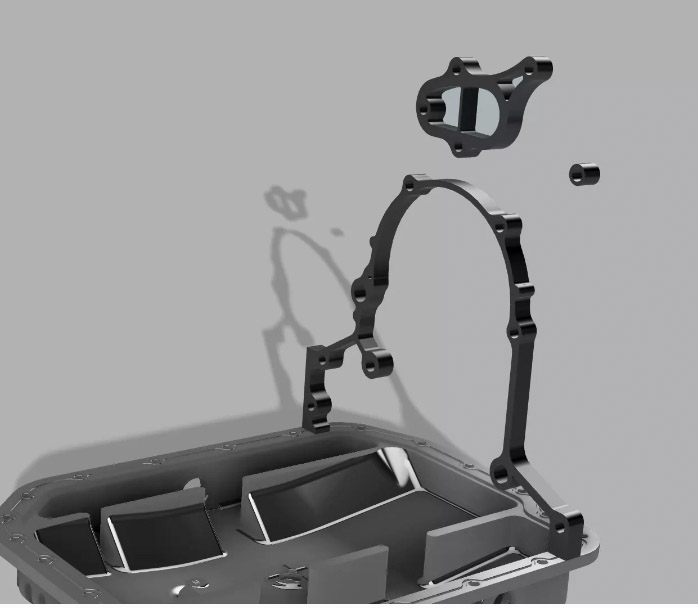